A bit of insight into the 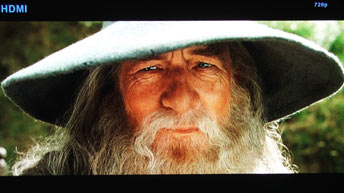 I came to buy the Sony DVPNS76H Upscaling DVD player with HDMI (Here in Australia for $208) thanks to the positive reviews here and here on the DTVForums, which led me to the very long English thread about them here on AVForums. Basically I could read nothing bad about the thing, and for around $200 for a DVD player that does HD upscaling via HDMI, and which has DivX support and 40 disc resume (important for me), I couldn't pass it up. This player is identical to the US version, the DVP-NS75H, with the addition that our version plays DivX files, and is region free.

I had considered the following players:

My reason for upgrading was that I wasn't entirely happy about how things were looking from my 'old' Pioneer DV466 DVD player. So, what follows is my comparisons to that DVD player, outputs via component vs HDMI, and what differences there are between upscaled resolutions.

As a further nod to the quality of this unit, it's finally been added to the widely regarded DVD Benchmark at 'Secrets of Home Theater & High Fidelity'. The review gave it a score of 85, and it tops the list of players reviewed in the roundup so far for 2007, which includes the Philips DVP5960, the Samsung HD960 and even a Sony BluRay player, the BDP-S1. Note that the review is of the American version, the DVP-NS75H.

(Taken from the Sony website Have a look there if you wish to see the a photo of the player itself, as I haven't got around to doing that yet!)

Thanks to Submariner from the DTVForums, I have now put up the Service manual for this machine, which includes info on how to access the service menu and construction diagrams etc. Download it here

I'd say that the machine is a little behind the Pioneer for general use, but only slightly. The startup is slower and the remote is nowhere as intuitive as the Pioneer... tinsy buttons... yurgh. BUT I don't use the remotes that come with things these days, I use a Sony Universal learning remote (the RM-VL710 if you're interested), so really every DVD player is the same to me remote wise and a slightly slower startup is not much of an issue to me.

DivX playback worked as easily as I'd hoped. I have quite a number of DivX files on cds and DVDs, and the few I tested (a movie and some tv episodes) all worked fine and looked great. It's not a feature I'll use a lot, I have a HTPC for that, but it's handy if I want to watch something I've archived onto disc. It also includes the DivX Video On Demand system, but I think that seems a little dead in the water and a complete waste of time.

Multi disc resume seems to work a treat. The manual states 6 disc resume, the website states 40... I'll go with 40 as I would assume the website to be more up to date than a printed manual, but I haven't put enough discs in it yet to really know. Update: Now that I have whacked in a lot of discs I would now start to believe that maybe 6 really is the number, even though my latest Sony Pulse magazine (read: big shiny ad) also states the 40 disc resume. I'll do a full test some time down the track

The unit is indeed multiregion out of the box, at least in the Australian version. As mentioned in Submariner's review, the box has tape around it stating it has been opened by Sony quality control. That's where they region mod it. I have tested it with Region 4 and Region 1 discs with no issues whatsoever.

I have yet watched a movie in entirity, so I can't comment on layer change speed or extended use feelings, the kids have ensured that we have not had a free moment to watch a whole movie as yet!

Subsections (Yes, all the images are in these :) )

See these pages for some more in depth looks at various features, and a tonne of screen captures:

So, now that I have it hooked up via HDMI and running it upscaled into my Teac 32" HD LCD, I can truly say I'm very happy with this unit. The image quality over HDMI is a marked improvement over component, and I'm really enjoying watching films via this unit.

Do note that while I've included a lot of screen captures here, they really do not give a true impression of the quality of the image. It does look a lot better in person, let me assure you of that!