A little rundown of the 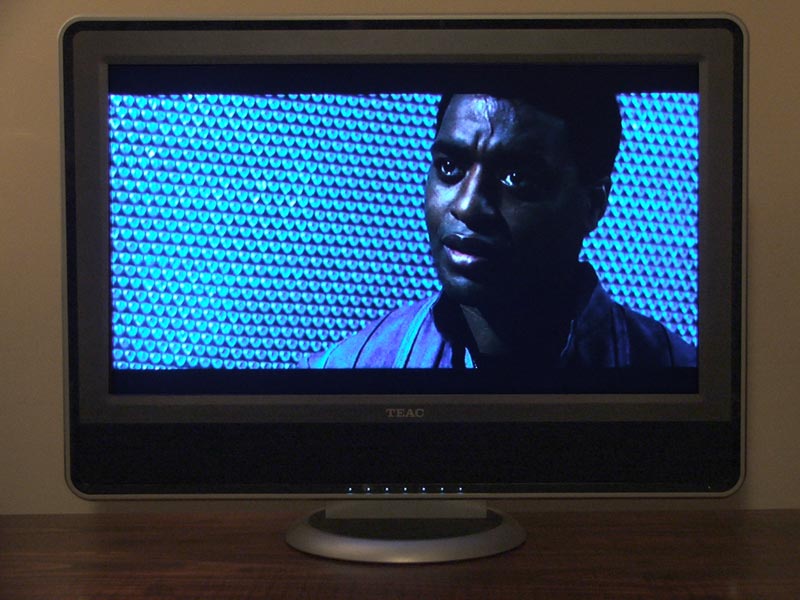 (I have brightened the surrounds in this picture, while leaving the screen image as was, just so you can see the set)

A Note on the origins of this set:

This Television set is made by a Chinese company called Amoi and is sold with that name in a number of markets, including Europe and Asia. The Amoi model that relates to this Teac model is the Amoi Elite LC32T1E (no direct link available) I believe. The site lists optional extras that the set can have, of which this set has the first one only.:

After reading users' opinions of this set and its 37" and 42" siblings, I decided that it was the screen for me.

So far I am delighted with the set, and just wished to share some information to those who may be considering buying one.All information contained here is merely based on my observations and opinions. If any of this is not correct (more than likely when I start hypothesizing on the service menu side of things), then please let me know, I'm more than happy to be corrected.

All photos are taken with a Fuji Finepix 4 megapixel S5500 camera. In almost all cases the image has been untouched other than scaling and cropping. A couple of images have had Photoshop's 'Auto Levels' applied when the photo didn't match enough what the screen looks like, but in no way have I tried to improve the quality of the images via this method. Differences in brightness etc. from photo to photo can be explained by the camera being set on 'Auto' and switching its exposure. (silly thing to do, I know)

(I will be taking some daytime pics of the set soon) To my eye this is a really nice looking set. The muted surrounds and fabric speaker covering along the base of the screen all look very nice. Also, the touch controls along the base of the bezel (seen as little lights) are a nice touch, although how many people ever use controls on the actual set it beyond me.

I state right of the bat that I am no expert in LCD screen or the like, I just like a great image and do seem to notice issues in displays moreso than your 'average' consumer. I am using the tv currently setup as such:

The specs state 1200:1 contrast ratio and 500cd/m^2 brightness, but I know how unreliable these figures are. In any case they stack up well against the other panels in this category. As for a purely subjective measure, it looks fantastic. So far everyone that has seen the set has commented how great the image looks. It has really nice contrast and rich colours. I'm very happy with this side of tings.

Seeing as everything I'm feeding this set (other than the PC via VGA) is non-HD, I was particularly interested in how the set scaled up SD content such as SD digital TV and SD DVD. I'm happy to report that it does so with aplomb as far as I can tell. Everything looks smooth and naturally scaled with minimal aliasing and 'jaggies' and has great detail.

VGA running into this set is also just wonderful. I have an old nVidia Geforce440MX running at 1360x768 into the set (so, yeah, 6 pixels off 1:1) and it looks just fantastic, I could see using this as an actual desktop screen if you really wanted to.

The only downside I think I have with it, although am unsure whether it's with the screen as such, or just because it's a larger display, or inherent in all LCDs currently... is that with DVD playback when there is a slow pan, there is a sort of juddering (not bad like 3:2 pulldown mind you). It's not a blurring, it's more like a badly de-interlaced image I guess, my wife doesn't even notice, but it bugs me. This is why I'm after a HDMI DVD player as my current player (a Pioneer DV466) doesn't do PAL progressive scan, so I'm feeding it interlaced material and am left with the internal de-interlacer doing its thing. I don't seem to notice it as much while watching digital tv, pretty much never really. I'm not entirely sure why that is.

We do not use the internal analogue tuner at all.

In my review of a Sony upscaling DVD player I used this set for all testing, so screenshots from that test are good examples of images from this unit.

Here are some shots of Troy from channel Nine on SD digital TV, just because it was on when I was taking photos. 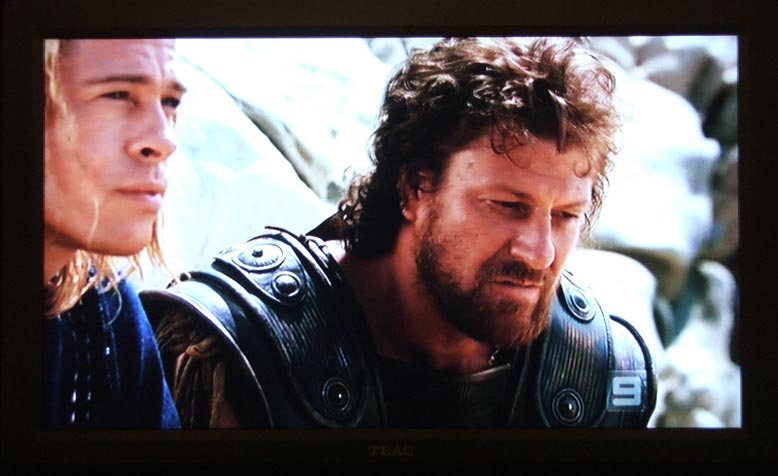 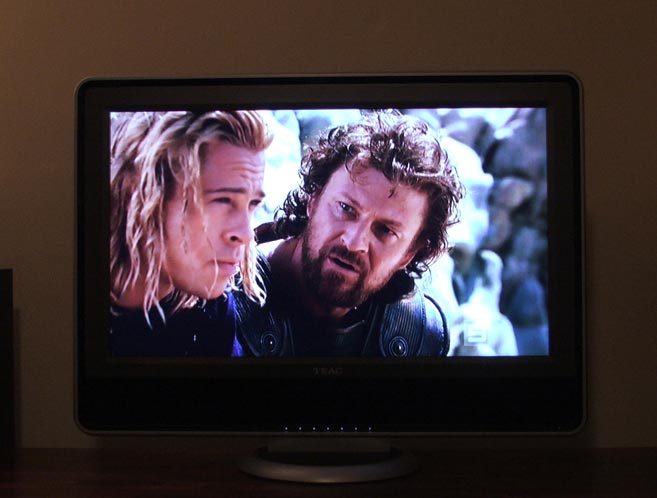